Welcome to the Point Alpha Foundation

FOR A EUROPE IN PEACE AND FREEDOM

Select from the offers designed specifically for students and adults.

Here is an overview of the varying open seminars and events program.

Please book a guided tour of the memorial in advance either online or by phone.

(Now, that which belongs together grows together.)

“One morning the radar man yelled "Alarm, Alarm" and reported 50 East German border guards right on the fence. Our commander was about to trigger the military reporting chain to Fulda and Heidelberg. Fortunately, the Rhön fog cleared, and down below there were only large hares. We thought the Third World War was coming.”

“In church, one heard: "Thou shalt love thy enemies". In school, class-hatred was preached. It was becoming clear to me that this is my wonderful, beloved homeland - I felt at home in the familiar environment - but this is not my country. That was a terribly bitter realization.”

“Living with the lack of freedom in the GDR was difficult. The older and more mature I became, the more aware I became of it. It was already unbelievable to me and a massive cut in personal freedom that you needed a pass from the "Vopos" (GDR Peoples Police) to be allowed to drive to certain areas in your own homeland.”

“We lived very close to the beech mill. The farm had been divided. There you could experience the brutality of the division firsthand. Protection, or so we believed, would be provided by the American soldiers if there was an attack by the Warsaw Pact.”

At the Point Alpha Memorial, you will visit an authentic Cold War site and experience a unique testimony to four decades of contemporary history. This is where the outposts of NATO and the Warsaw Pact faced each other until 1990.

The Point Alpha Foundation preserves the Point Alpha Memorial as a place of remembrance of German division. In addition to scientific research on the Cold War in Europe, this historical learning site is increasingly being included into the curriculum of younger generations.

The educational program of the Point Alpha Academy is diverse and modular. For adult education and professional development, open seminars and events are offered on a semi-annual basis and can be arranged individually for groups upon request.

The Hottest Point of the Cold War

On the Border between

The Point Alpha Memorial offers you numerous possibilities to explore the location where the Third World War could have broken out at any moment . 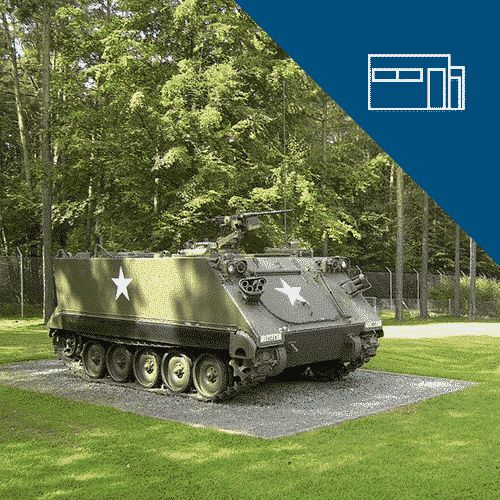 History Brought to Life at an Original Location
In the former U.S. Camp, history is brought to life and made comprehensible at the original location. The former barracks in the camp now serve as presentation areas and complement the impressions that visitors can gather on the grounds of the former military base with explanatory content and contemporary testimonies.

While the “Cold War” exhibition in Barracks-A focuses on the history, everyday military life, and the strategic importance of Point Alpha, the “Everyday Life” exhibition in Barracks-B focuses on how people in the Hessian border area lived together with American soldiers. Barracks-C, the camp’s former sports and recreation area, is now home to the memorial bistro, “Black Horse Inn.”

House on The Border

The House on the Border is in itself a piece of German-German success story. After committed citizens on both sides of the former border prevented the demolition of the U.S. Observation Post Point Alpha in the early 1990s, more and more visitors have come to the site. The desire to also provide information about the GDR’s border regime at this unique site of bloc confrontation was great – as was the need to portray the lives and suffering of the population on the former border but for this purpose the U.S. Camp was unsuitable. In order to be able to show a realistic and balanced representation of the conditions on the eastern side of the inner-German border, one that would also be comprehensible for later generations, the House on the Border was built. The two sponsoring associations from both sides of the former border, Hessian and Thuringian had successfully campaigned for the new building, which was constructed in 2003 and now stands directly on the former patrol road. Therefore, between the American observation post on the Hessian side and the Thuringian “House on the Border,” visitors will be able to take an impressive tour of the memorial’s entire 100,000-square-meter grounds which depict the historical development of the inner-German border in its global political dimension. The exhibitions in the House on the Border take up the themes “The State Border of the GDR in the Cold War”, “Freedoms!” and “From Death Strip to Lifeline.” Additionally, space for temporary and traveling exhibitions is provided. 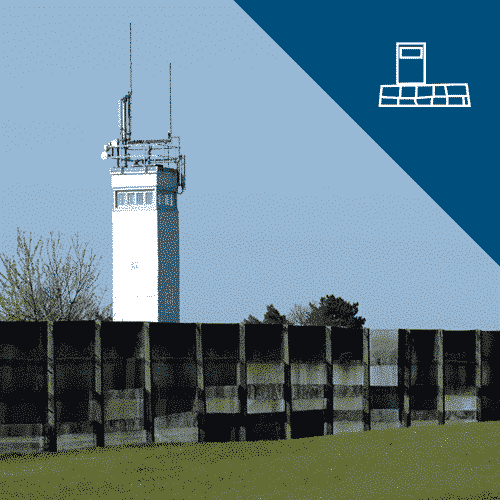 On the Patrol Road between the House on the Border (Geisa/Thuringia) and the former U.S. Observation Post Point Alpha (Rasdorf/Hesse), the GDR border installations from the 1950s and 1960s can be seen in their reconstructed individual stages of expansion at an authentic historical site. The 1970s and 1980s section, as well as the observation tower of the GDR border troops have been preserved and presented true-to-the-original.

In the 1950s, a barbed wire fence succeeded the once simple wooden roadblock which indicated the border between two occupational zones after the war. Over the following decade, the border was equipped with a double-row fence stabilized with concrete posts. Between these post, wooden box- mines were initially placed and later, plastic mines. From the 1970s onwards, the infamous fragmentation mines (SM 70) were installed directly on the fence. In its last stage of development, the metal fence was in average a little over three meters high, and as of 1972 preceded by a motor vehicle trench. This was intended to prevent a motor vehicle from breaking through the GDR border and escaping to the West. The different stages of development impressively illustrate how the face of the inner-German border changed over four decades and became increasingly impassable.

Fourteen monumental sculptures captivate visitors along the historic Death Strip of the former inner-German border between Hesse and Thuringia. The iron sculptures on the Road of Hope are reminiscent of the Iron Curtain, whose length of 1400 meters reflects the 1400 km long former inner-German border. Here, in the so-called Fulda Gap, a Third World War could have broken out, because this border not only separated Germany, but also divided Europe and the world – it was the border between freedom and oppression.

The Point Alpha Foundation has erected the Road of Hope as an impressive symbol to commemorate the resistance against the communist dictatorships in Central and Eastern Europe: Peoples Uprising in East Germany on June 17, 1953, Hungarian Uprising in 1956, Prague Spring in 1968, Solidarity Movement in Poland in the 1980s, and the great peace demonstrations in East Germany in 1989. All of these courageous forms of rebellion were an expression of an unbroken will for freedom and, at the same time, of the firm belief that people can change even the almost impossible if they stand up for their very own convictions with the courage of their despair and are willing to make sacrifices to do so. The impressive biographies of individuals who dared to resist dictatorships also stand for this.

With its 14 stations, the Road of Hope is linked to the Christian Way of the Cross. It encourages the viewer to remember his or her own fate in difficult times and to relate it to the sculptures. Only these individual reflections complete the total work of art, Road of Hope.

Begun in 2009, the work was completed on October 3, 2010. The sculptures were created by the artist Dr. Ulrich Barnickel, born in 1955, who grew up in Weimar, studied sculpture at Burg Giebichenstein in Halle an der Saale and, after several applications for emigration, was expatriated to the Federal Republic in 1985 and now lives near Fulda. Works by Ulrich Barnickel have been shown in numerous exhibitions in Germany and abroad. The art project of the Point Alpha Foundation was supported by the Federal Government Commissioner for Culture and Media and the Thuringian Ministry of Culture. 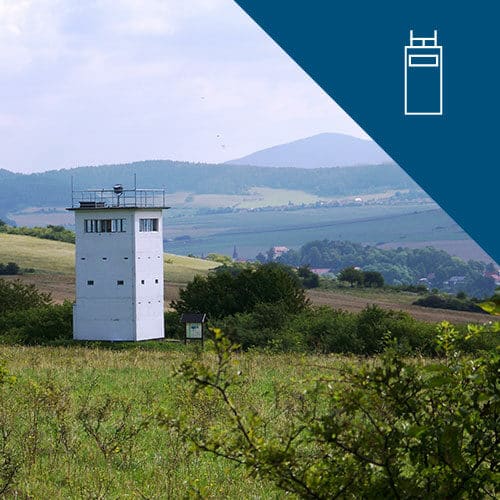 The Wiesenfeld Tower, an original structure is one of the highlights that can be seen along the tour of the memorial. It is located about three kilometers south of the House on the Border and can be reached on foot via the Patrol Road along the Path of Hope. The observation tower near Wiesenfeld (Geisa), which dates from 1974/75, was part of the GDR border security installations and served as a command post for the Border Guard Detachment Geisa. The tower provided space for a crew of six, who until 1990 controlled a 15-kilometer strip of the GDR / West German border. This particular section of the border gained national relevance in 1962 when GDR Captain Rudi Arnstadt was killed by a West German Border Guard in the immediate vicinity of the border troop’s tower.

The tower has been restored, and the exhibition inside deals with its function in the system of border security installations. The area around the Wiesenfeld Tower is freely accessible and the tower can be viewed from the outside at any time. To see the inside, please book a guided tour in advance.